The Susitna 100 and the Little Su 50K are wilderness races and as such are subject to Mother Nature's whims. Each year presents a unique set of race conditions that is determined as much by the weather two weeks before the race as the preceding four months. The Race Committee makes an extraordinary effort to provide a trail that accommodates all the human-powered sports for which there are divisions. However, these races are as much about tenacity and patience as they are about strength and speed. Bear in mind you are racing across a series of lakes and swamps that nature did not design for skiing or snowshoeing, much less bicycling and running.

Weather-wise, the course lies between a rock and a hard place. The rock is the Alaska Range, which often sends its greetings to racers via an "arctic express", a high-pressure system accompanied by a north wind that brings cold temperatures and colder wind chill. The skies will assume an innocent hue of baby blue, with a few scattered clouds. Your exposed skin will freeze in a few minutes. The hard place is Knik Arm, an extension of the Pacific Ocean that is an avenue for the Japanese current and warm-but-wet storms. Here, mercifully balmy temperatures can be undone by the sudden deposit of a foot or more of fresh snow. Thus, you may be in shirt sleeves, but you will also be mired in white muck. In short, as befits a wilderness race, expect temperatures to be anywhere in the 80 degrees between 40-above-zero and 40-below-zero F. Fortunately, we usually end up with a reasonable compromise of the above-stated horrors.The following presents a general, unscientific summary of the typical variation in temperature on race day. By 11 AM (two hours into the Susitna 100 or at the start of the Little Su 50K) you will notice a 10-20 degree rise in temperature as the sun climbs over the Chugach Mountains. You will enjoy three or four hours of "warmth" and then a slow but steady descent into nightfall. As a rule, expect a 40-50 degree temperature range during the race (exclusive of wind chill). Warmer years will see a high that is several degrees above freezing, colder years may see a high barely above zero degrees. It is worth tracking the regional trends (in the newspapers, on a cable "weather channel", or via the internet) starting the Monday before the race. It goes without saying that temperatures will significantly influence your choices in clothing and race tactics.

On the other hand, daylight conditions (or lack thereof) are wholly predictable. For our lifetime, the earth is unlikely to alter either its orbit or its axis of rotation and thus we will have accurate knowledge of our sunrises and sunsets. It is, however, worth mentioning that one benefit of our northern latitude is a lengthening of our twilight hours around sunrise and sunset. Many of you may be accustomed to a two-minute sunset that is not unlike switching off a light bulb. Alaska enjoys slow, often spectacular dawns and dusks. Thus although meteorologists may tell you that Anchorage only receives nine hours of daylight in mid-February, the effect of the sun's dawdling on the horizon at either end of the day is to add a few hours of muted light, sufficient to move without headlamps. 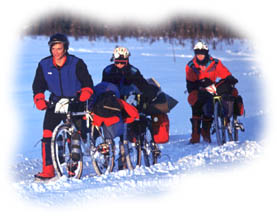 Although the Susitna 100 and the Little Su 50K are human-powered races, if it were not for the internal combustion engine we would be unlikely to attract the 200 or more of you who join us each year. In particular, it is our friend the snow-machine that creates the trails over which we pass. If you have any doubts as to how much we owe to the trail-grooming crew, you are invited to step five feet off of the trail anywhere on the course. Enough said.

Snow Storms
The Susitna basin isn't Buffalo, New York; a snow storm often leaves as little as 6 inches accumulation. But even 6 inches that has not been consolidated with some time and snow machine traffic is going to slow everyone down, especially bikers and runners.

However, with the Susitna 100 or the Little Su 50K, if you wake up race day to a fresh blanket of snow on the course, you can simply declare yourself in the ski or foot division on race morning and have a much more enjoyable (albeit still strenuous) race.

Thaws
The Susitna basin isn't Miami Beach either, but we do periodically receive mid-winter Chinooks that drive the thermometer well above freezing. Anything above freezing is going to soften the trail. The thaw starts at the surface and deepens. Any sort of traffic will mash the trail, ultimately miring anyone or anything in a slush bog. The trail can absorb a few days of thaw before it is impassable, but wet feet and gear are going to pose continuous concerns.

Cold Snow Storm or Cold Wind
The Susitna basin isn't Fairbanks either. But temperatures can and will get down to -20 degrees Fahrenheit and, if extreme temperatures linger during days and nights, hoar frost that looks like snow will cover the trail. Skiers will have trouble getting any glide in these conditions. Likewise, a cold wind will drift dry snow onto the trail.

Extended Cold Snap
When the weather is cold (continuously below 0 degrees F) for a week or longer, the snow dries out. Any snowmachine traffic will fluff it up to the consistency of dry beach sand. This happened on the Yentna River in the 1996 race. Bikers walked and runners went for their emergency snowshoes.

Thaw Followed by Freezing Temperatures
Think of a skating rink. You won't be leaving any tracks on the glacier we call a race course. This is about the only condition that is menacing to snowshoers and skiers. Our advice: declare for the foot division and put short sheet-metal screws in your shoes. At least the sled won't slow you down. 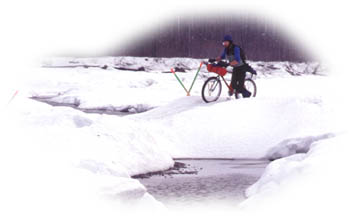 Several of the rivers along the course are susceptible to overflow, regardless of the weather. Overflow occurs when unfrozen water in a river is forced over the top of the ice that covers it. Overflow can be caused by any of several factors, including heavy snow and/or rain (that causes the ice to sink) and mid-winter thaws (that melt through the ice). Regardless of the cause, overflow brings the risk of getting some or all of your body wet in sub-freezing temperatures. Getting wet during the race is a life-threatening situation. The combination of wet feet and prolonged exposure to even mild winter conditions is an invitation to frostbitten toes, so keep your feet dry at all costs . . . even if it means going an extra couple of miles to avoid overflow.  If you encounter overflow, spend a minute evaluating its extent and the thickness of the ice (if any) beneath the water. It may be possible to (carefully) step across or quickly through the water. Just in case, carry a couple of heavy-duty trash bags in your pack that you can wear like waders over your feet and legs to walk through any shallow overflow.

As we have described, the Susitna 100 course is actually a series of commonly-used snowmachine and dog sled trails linked together. The trails are put in every winter (as snow permits) by the committee and the motoring public. These trails are generally placed in about the same location every year, but one of the attractions of snow-mobiling in Alaska is the high degree of freedom we have in "going as we please". Thus, trails abound everywhere and it is quite possible to get on the wrong trail and ultimately get lost on this course. In fact, someone does this every year, often for several hours. As a racer, you have four (4) factors working to help you stay on track. 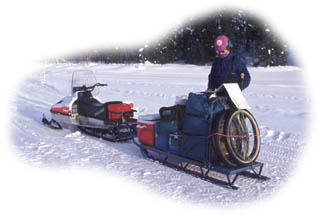 We have done our best to describe the course, especially its critical junctions. It is worth studying the course map and distances between check points (bring a copy along, even) and to develop a general sense of the course's orientation. Once you get a sense of your "race pace" you should be able to "guess-timate" the times between checkpoints. However, be a realist! You are only going to slow down on this course and the surface conditions change often enough that missing the mark by 30-60 minutes is not out of the question.

Trail markers
The trail is fastidiously marked with lath (long, thin wooden stakes) and flagging (plastic ribbon). We will provide samples at the Pre-race Check-In. They are both painted and embellished with a reflective tape that will glow brilliantly in the light of your headlamp. Each of the approximately 1,000 pieces of lath marking the course is hand labled "SU 100". The same lath is used to mark both race courses. At the race start, the course is fully marked; however as the weekend wears on, we lose some markers. Nonetheless, if you go more than 30 minutes without seeing a marker, you have cause for concern. Also, remember that other groups (snow-machiners and dog-mushers) are marking their courses as well. Make sure you are following the right markers!

Tracks
You are racing with more than 100 of the most courageous athletes in the world. Do not be shy about following their tracks. Look for bike tire tread, snowshoe crampon marks, foot-prints, ski-pole holes- and lots of them. In short, any indication that if you have gone awry, at least you have lots of company.

Check-point controls
You are required to check-in and check-out of every check point. Failure to do so is grounds for disqualification. We use this information to track your progress or lack thereof. If we believe you are overdue at a check-point, a search may be immediately launched. Each course segment is patrolled by race officials on snow machines. They may stop to chat (i.e., assess your condition); please cooperate and feel free to pump them for information about what's ahead (such as "are we there yet?").

Hypothermia and dehydration (they usually travel in pairs) are your mortal enemies. As ultra-distance athletes you are (hopefully) familiar with dehydration; hypothermia is a bonus danger that prevails in cold regions. 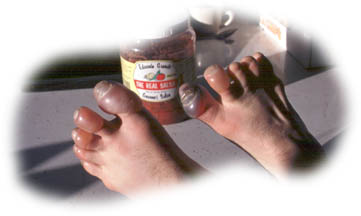 Frostbite often accompanies dehydration and hypothermia. Use this knowledge as added incentive to monitor your fluid intake and heat balance and to remain proactive on keeping these problems at bay. Be prepared to deal with them as discussed above. However, frostbite is quite insidious and can work its way under your skin (literally) in a couple of other ways.

Wind Exposure
Even if you feel warm and well-hydrated, if you are exposing some skin to a brisk wind (especially a north or west wind) you are at risk for frostbite. A typical victim is the nose. If you are fighting a wind, consider a face mask or using strips of duct tape in strategic locations (such as across the nose) to "windproof" your face.

Localized Heat Loss
As your torso cools down, warm blood is withheld from your fingers and toes because the body wants to protect its vital organs. If you get your fingers and/or toes wet, things really get ugly. Again, vigilance and early response is the key. Fingers are easy; simply pull out your extreme-temperature mittens. They are clumsy but incredibly effective. If your feet are cold, change into dry socks and add another layer (such as neoprene); if you are out of socks, add a neoprene outer boot.

If you get frostbite (or think you have frostbite), proceed to closest check point (whether it's ahead or behind you). If possible, flag down a snow-machine and get evacuated. The check-point officials can stabilize your condition until a physician can make a better assessment in Anchorage. Don't get macho about this stuff; frost-bite is forever, even if you manage to hang onto all of your digits. Following a bout of frostbite, scar tissue often develops, leading to impaired circulation of blood (more frostbite).